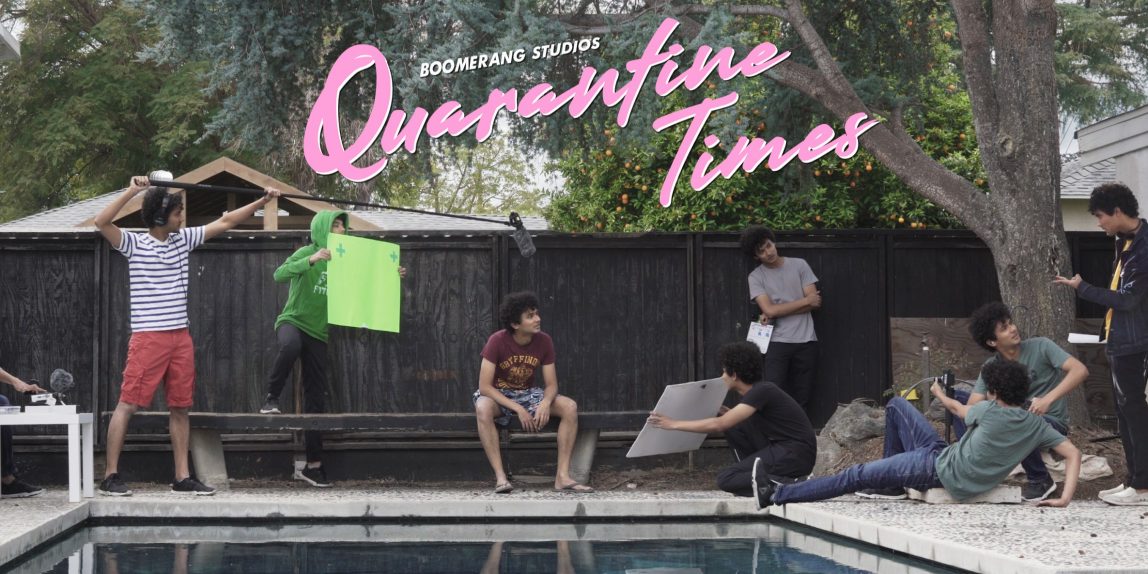 As many of you have seen on our social media platforms, we released a picture of a crew on a film set last week. The trick in the image is that all the crew members were played by just one person, our resident filmmaker, Sunny Naguri.

Here is some information from Sunny Naguri on how he pulled off the effect.

Boomerang: So lets get the cliches out of the way. How did you get the idea and What was the thought process behind the image?

Sunny Naguri: The idea came from memes posted on Instagram. Especially this particular one where I saw the crew members working from home over a video conference call. Which makes no sense whatsoever. But it made for a good joke. That stayed in my mind. A few days later, I was in the shower and the idea struck me. I was like, wouldnt it be great to see only one person play all the roles on the set. Which if you remember is how we started off with Boomerang. Also a nice homage/throwback to 10 year anniversary.

Boomerang: Nice subtext there I see.

Sunny Naguri: Yeah! So, the next day I took a picture of the backdrop and began previsualizing it. To see where all the crew would go.

Once I did the planning, it was pretty straight forward. Without the visual plan, It would’ve been a nightmare to figure it out as I went along. Although I did add more crew members as I went along. It was only because I knew the main spots and had gaps in between. Like for example, I added a PA holding the green screen in between the Boom Op and the actor.

Boomerang: Tell me more about the issues or problems you faced during the actual shoot.

Sunny Naguri: The main one was, I couldn’t set a 10 second timer and take the pictures. The time just wasn’t enough. Especially if I wanted to get the right pose.

Boomerang: So how did you take them?

Sunny Naguri: It was actually a video. I shot a video for each crew member. This gave me the flexibility to get into and experiment with each character to see what would feel natural. It also gave me more options for post. But if you have another person to take the picture, I would definitely take advantage of that because of the extra resolution you can get with pictures.

Sunny Naguri: Exactly! All the clips together was approximately 20GB.

Boomerang: So what you’re telling me is that, somewhere in the Boomerang archives are video clips of you going crazy by yourself playing each role?!

Sunny Naguri: I regret saying that. Let’s cut that part out of the interview. Okay so, the next challenge was lighting. If all the characters were wearing the same costume, lighting wouldn’t be that big a deal because it would take place in a shorter time span and the sun wouldn’t move around so much. But there were Nine costume changes in total. It took 3 hours to get all the shooting done. Then I realized when I got to editing it that the director character was only partially in frame. I had to go back to shoot that. Then I realised I could add another character behind him. That’s how the scripty got added.

Boomerang: So you didn’t tell us how you got over the lighting challenge.

Sunny Naguri: It was a calculated move on my part to shoot it on a cloudy day. I was just going to plan that day and shoot the actual assets for the picture another day. I realized it was partly cloudy the day of and decided to shoot everything the same day, in case there isn’t another cloudy day anytime soon. This is LA after all. Every time, I used to change into character, wait for the clouds to cover the sun and go pose as the character. There were still lighting inconsistencies but a lot less than if it would’ve been a sunny day.

Another big issue was that I had no tripod. So I used marking tape and put it on a chair. Of course when I start and stopped recording, the camera moved. I had to match everything in post.

Sunny Naguri: Oh! and one more thing. One that I didn’t think was a big deal, became a big problem in post. The reflections in the pool. I thought since it was a calm day, there wouldn’t be any movement in the water. And boy was I wrong. I spent a lot of time rotoing the characters in the water. You can still see inconsistencies if you look closely. I didn’t care since people are looking at this on their phones anyways and also, I gave myself the deadline to finish it the same day. So that was that.

Boomerang: I hate to ask you this but did you receive any hate against this?

Sunny Naguri: I thought there was noting offensive in this but obviously I was wrong. One was people did not realize it was all me and threw hate at me saying that “lives are more important that movies” and that “we should self isolate and stay home.”

Boomerang: Clearly they didn’t get the point.

Sunny Naguri: Exactly! Coming to that point, another message I got was, “There are so many filmmakers out of jobs and here you are making fun of them”

Sunny Naguri: I was like, I don’t even know what to say. I have accepted the fact that there is going to be hate whatever I do. So yeah.

Boomerang: True. So thank you for this insightful chat into “Quarantine Times” #ShootinProgress . Now back to the cliches, any last words before we end the interview?

Before and After comparison.